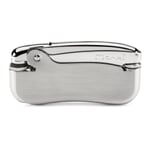 Brass Petrol Lighter
Can be delivered at end of April, Place your order now

Based on a 1959 design that hints at Streamline Modernism. Originally, streamlined design was about reducing the drag of mobile design objects, i.e. mainly automobiles, airships or locomotives. However, the design elements of the curved shape and the long horizontal lines then became the sign of the times and were thus adopted in architecture and product design.

In the beginning the fire. In the end, the stuff

It took a while for human ingenuity to make available to Homo sapiens in the form of a lighter what flint and fire drills were to early hominids. The first modern lighters were created at the beginning of the 19th century, and the pocket lighter was developed at the beginning of the 20th century. What they all have in common is that they constructively combine all the stuff with which fire is made: Combustion material (gasoline and cotton wick or gas), spark initiator (flint or piezoelectric crystal), and the spark-triggering mechanism (friction wheel or striking iron). Tsubota Pearl, a metalworking company in Tokyo, has been dedicated to the needs of the ambitious smoker since 1952 - and does so with high standards and high-quality results. In addition to lighters, cigarette cases and ashtrays, Tsubota Pearl has also been producing articles that also fulfill their function for non-smokers for several years.