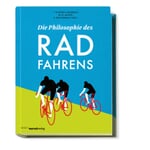 Hegel on the trolley? Nietzsche on the penny-farthing? Adorno on a racing bicycle? Unimaginable. Things look different for today's philosophers. The international authors assembled in this volume - most of them academically accomplished experts in philosophy and related subjects - bring both together in 16 essays. They are cycling enthusiasts who pursue their sport intensively, and for that very reason they ascribe to it a directly philosophical dimension. Thus, for example, the first major tours become a sequence of philosophical lessons that could not have been learned so quickly in any other way than through energy-sapping muscle work - such as the insight not to confuse reality with self-made illusions like Plato's cave dwellers, or the realization of the great value of Stoic philosophy when apathetically suffering uphill climbs. In racing competition, questions of rivalry and fairness arise immediately - and with them ethical questions of great depth. And what does feminist philosophy have to say about the riding style of female road cyclists? And why, in the end, does cycling make you happy, as the authors repeatedly affirm? The answer may be quite simple. The cyclist knows that the journey is more important than the destination. And that is already per se deeply philosophical thought.