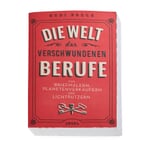 Many of our ancestors have spent their lives in activities of which we hardly know anything anymore. A considerable part of our family names derives from occupational names, activities, tools, from products and trade goods, and even from work sounds or accompanying phenomena. In the last two centuries, the world of work has changed rapidly and hundreds of occupations have become extinct. How much highly specialized knowledge and skill has been lost with it can hardly be estimated. (We encounter this phenomenon constantly in our work.) Austrian author Rudi Palla has collected a large number of such extinct professions for his book and resurrects them for us in portraits: Barometer maker, wire puller, gauger, pleasure fireworker, night watchman, planet seller, rosemaker, soap boiler, armchair carrier, laundry maid and many others. The alphabetically arranged, carefully illustrated, entertaining cultural history has a sense for anecdotes, curiosities and illustrations and leads into a treasure and wonder chamber - a vanished world in which there were masters of the hammer, the file, the cobbler's knife or the needle. The vanished professions also include type founders, type cutters and type setters. In the first edition of this book in 1994 (as volume 115 of the "Other Library"), entitled "Disappeared Work," some of these professions were still there. The book series founded by Hans Magnus Enzensberger was published at that time (still) in lead type in a limited edition, which was always melted down when a volume appeared, which considerably increased - and still increases - the bibliophile value of the volumes. The 2nd revised new edition has again been produced in the "normal" modern typesetting and printing process, but has been somewhat shortened. It now comes under a new title and without illustrations, but still shows a certain Vienna-heaviness, which is due to the sedentariness of the author.

Rudi Palla: The World of Disappeared Professions. 294 pages with black and white illustrations. 21 x 14 cm, paperback. Published by Insel Verlag, 1st edition May 2018.
More articles of the manufacturer:
Have a question?