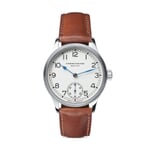 Dornblüth 99.0
In stock, Delivery in 4-5 days
Only small amount in shop

Dornblüth watches are meanwhile renowned well beyond Germany's borders because they are produced with old precision machines. They demonstrate impressively that watches of the highest quality still can be manufactured without complex computer processing and CnC machines.

In some of our department stores, you have the opportunity to take a look at this watch.

As a young master watchmaker in the late 1950s, Dieter Dornblüth came up with the idea that he could develop a movement for a wristwatch by himself. He produced a few initial designs and some of the parts – and that was all. Later on, he took over a watch store in Kalbe an der Milde, a small town in Saxony-Anhalt, and devoted himself to repairing and selling watches. When his son Dirk, also a master watchmaker, gave him a self-designed wristwatch for his 60th birthday in 1999, Dieter Dornblüth told his son about the long-forgotten plan – whereupon they decided to give it a try. Today, Dornblüth watches are known far beyond the borders of Germany. Their manufactural approach by means of deploying meticulous manual work and putting, for the most part, historic precision machines into use again reminds us that one can still build watches of the highest quality without elaborate computing technology and CNC machines.