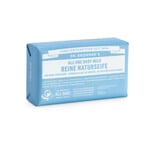 Like the shower gels, Dr. Bronner’s makes these natural soaps from coconut, olive, palm kernel, hemp and jojoba oils, but here as a practical bar soap. In each case, an essential oil is added, which gives the soap a strong, intense scent. Dr. Bronner’s Only the mild soap comes without any further additives and is therefore also suitable for very sensitive skin.
The majority of the raw materials - including the palm kernel oil - are sourced from sustainably managed organic farming and fair trade. The paper is printed with water- and soy-based inks.

140 g bar.
Dr. Bronner’s mild soap. Without any additives of essential oil, especially good for sensitive skin.
More articles of the manufacturer:
Have a question?