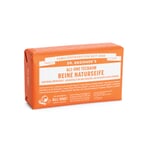 Dr. Bronner’s Soap Bar
Tea Tree
In stock, Delivery in 6-7 days
For a delivery in time for Christmas please note the different "order by dates" in "shipping costs"

Dr. Bronner’s Tea Tree Soap. With essential tea tree oil. The soap is also suitable for the care of problem skin prone to impurities and flaking and exudes the typical, spicy scent of tea tree oil.

140 g bar.
Dr. Bronner’s tea tree oil soap. With essential tea tree oil. The soap is also suitable for the care of impurities and flakiness prone problem skin and exudes the typical, spicy scent of tea tree oil.
More articles of the manufacturer:
Have a question?