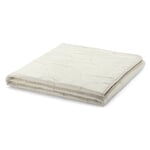 Duo winter blanket hemp
155 × 220 cm
In stock, Delivery in 5-6 days
For a delivery in time for Christmas please note the different "order by dates" in "shipping costs"

Duo quilts consist of two individual quilts, which are quilted together all around the edge. This allows an air chamber to form between the two blankets, which provides additional insulation and keeps the heat under the blanket. So far, so familiar. Relatively unusual, however, is the filling made of hemp. The natural fiber is not only one of the most sustainable materials, but also has a number of advantages that make hemp ideal for textiles and bedding.
Hemp fibers are hollow on the inside and can therefore store a lot of air, which has an insulating effect. Thus, the duo winter blanket has a high thermal insulation capacity, in addition, the hemp fibers have a temperature-regulating effect, so that even at higher ambient temperatures no heat accumulation can occur. And because hemp (like linen) can absorb a lot of moisture, but also quickly dissipate it again, a pleasant, dry sleeping climate is also ensured. The ticking of the individual quilts is made of fine, skin-friendly cotton satin, the cotton for which comes from controlled organic cultivation. For the filling, the hemp is processed into a dense fleece. Since hemp has a very low own weight, the duo winter blanket is nevertheless comparatively light and in combination with the cotton sateen also breathable.
Our duo blanket made of hemp can not be washed, but that does not matter at all, because the hemp fibers are naturally antimicrobial, antistatic, stain-resistant and, incidentally, very well tolerated by allergy sufferers due to their smooth surface and the absence of protein (such as keratin and lanolin). We recommend to air the blanket well on a regular basis.

Ancient and yet modern. Hemp

Along with flax and nettle, hemp is one of our oldest useful and cultivated plants. Until the 19th century, they were important raw materials for the clothing industry, for ropes, cords, sailcloth and much more. With the industrial revolution and the triumph of cotton, the robust fiber plants lost importance, but as rapidly renewable, natural raw materials they already score points in cultivation and harvesting and are therefore among the most sustainable materials today.
Hemp, for example, requires significantly less water than cotton. Hemp is frugal and pest-resistant, so there is no need to use herbicides, insecticides or synthetic fertilizers either during cultivation or during harvesting and processing. With its large root system, the deep-rooted plant ensures good soil loosening, which has a positive effect on soil rigidity. And hemp suppresses wild weed growth, which benefits crops grown later in the rotation. But even as a monoculture, hemp can be grown on the same land for several years without problems thanks to its self-tolerance.
Finally, as a textile, hemp is also superior to cotton in many properties: Resistance and wear resistance of the long, tear-resistant fibers are significantly better, which is why even sailcloth used to be made from hemp. Even today, extraction and processing are very costly, but thanks to new processes it is now possible to spin very fine, uniform yarns from the rather rough hemp fiber bundles, as required for clothing and bedding. Its use as a filling for bedding, on the other hand, is relatively new.
Until 1996, the cultivation of commercial hemp was prohibited in Germany. Since then, the share of local and also European hemp production has increased, but it is far from being able to meet the greatly increased demand. The majority of processed hemp fiber therefore comes from China.

Filling 100% hemp. Origin Germany and China. Ticking 100% cotton. Origin Pakistan. The blanket is not washable and should be aired regularly. Made in Germany.
155 × 200 cm. Filling weight 1.800 g. Total weight 2.800 g.
More articles of the manufacturer:
Have a question?