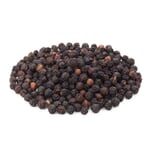 Handpicked Periyar Black Pepper, Refill Pack
In stock, Delivery in 5-6 days
Please note that unfortunately we cannot deliver to all countries at the moment.

The fruits of pepper plants are normally harvested in a green, unripe condition and dried until they become black. However, pepper only obtains a fine savour when its grains are harvested exactly at the moment of ripening. This is the case with our pepper. It comes from Kerala, in Southern India, which is especially well known as a spice region because of its climate. Here, the traditional, and, at this point nearly endangered pepper varieties of Karimunda, Vellamunda, and Thevanmunda grow. Pepper sorts, originally native to the jungle, are still cultivated in a traditional manner by small farmers, as they are sporadically replanted in the jungle. The harvest quantity is, therefore, small – the pepper’s aroma, on the other hand, is indescribable. Due to its extraordinarily high amount of essential oils (it adds up to 4.0% and is therefore two times as high as customary peppers), it has an especially noble aroma and a very fine taste. For our black as well as white peppers, the same rule applies: the varieties stem from ecological cultivation; they are pure and without residue; with no added preservatives, they are gently sundried and processed on location.

Up until a few decades ago, the spice trade structured its valuable products multifariously, according to origin and commercial categories. Today, large companies dominate the market; and, in these multi-coloured bags, there is nothing but dismal monotony. Once again, we do things differently: we preserve original provenances and highest qualities both in view of the actual product as well as with regard to testing, preparation, and appropriate storage. You’ll notice this most distinctly with the fineness of the aroma and the intensity of the spices.

At main harvest a portion of the fruit is left on the plant to turn red; it is not plucked until completely ripe. In this way, the pepper tastes uniquely intense; it is hot with a spicy aroma. 200 g refill pack.
Manufacturer:
Have a question?