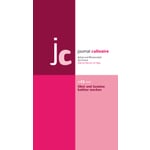 Journal Culinaire
No. 25 Obst und Gemüse haltbar machen
In stock, Delivery in 6-7 days
For a delivery in time for Christmas please note the different "order by dates" in "shipping costs"

State of the art: The Journal Culinaire is the first magazine in the German-speaking world to deal exclusively with the current state of the culture and science of eating and drinking. 32 issues have been published since 2005. With impressive consistency, the editors - publicist and chairman of the German Academy of Culinary Arts on the one hand, physicist on the other - succeed again in opening up exciting and unusual perspectives in each issue. Humanities scholars, natural scientists and cultural scientists regularly have their say, but of course also the practitioners of the industry: chefs, farmers, vintners, beekeepers, bakers, butchers ... It is this diversity of voices for which we value Journal Culinaire so much and which makes it so worth reading. That's why you can now get not only the current issue (No. 32: Vegetarian and vegan), but also a selection of previous issues from recent years.

With us: various still available issues of the booklet to choose from. Edited by Martin Wurzer-Berger. Collaboration: Prof. Dr. Thomas Vilgis. Each with numerous pictures and illustrations in colour and/or black and white. Format 17 × 29,7 cm, paperback. Published by Edition Wurzer & Vilgis.
From fermenting, pickling, candying ... History and cultural techniques of preserving vegetables and fruit. And a bit of chemistry and physics. 156 pages. Published in November 2017.
More articles of the manufacturer:
Have a question?