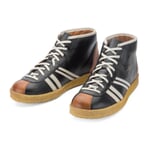 A Young Shoe Brand with a History. Zeha Berlin.

Zeha, as a brand, is over one hundred years old and yet young at the same time. Named after the initials of its founder Carl Häßner in German phonetics (ˈzeːha), the company became the shoe brand of choice among Berlin’s bohemians in the 1920s. Then, in the days of the GDR, the company traded under the name “VEB Spezialsportschuh Hohenleuben” (people-owned enterprise for special sports shoes in Hohenleuben) and was well-known for its handmade sports shoes. Moreover, the company became the outfitter for the GDR Olympic team. And, it has to be said, Zeha sports shoes, handmade from suitable materials, could fully compete with their Western counterparts. After the German reunification, the company had to file for insolvency, and the history of Zeha seemed to be over. However, when Alexander Barré from Berlin came across old Zeha shoes at a friend’s house, he decided to revive the brand in 2002. Initially, he sold the rare remaining stock; then, he secured the brand rights and started the production again. Since 2003 he has manufactured carefully crafted sports shoes, low and ankle-high shoes based on old models, catalogues, and cutting patterns in Portugal.