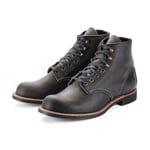 The Blacksmith can be considered the classic American work shoe. It dates back to the early 1900s, when Red Wing began serving rural America. The reliable shoe was worn in farming and blacksmith shops - the latter of which gave the model its name. Red Wing modified the shoe slightly and resumed production in 2014: For example, the outsole is now a Vibram® sole, whose tread provides grip on uneven terrain without being visually obtrusive. The upper material is a "Rough & Tough Leather" from the company's own tannery, which has a gritty, natural appearance thanks to the reduced use of surface treatments.

Work boots and shoes famed for their comfort and durability originate from Red Wing, Minnesota, since 1905. Red Wing treats the full-grain cowhides the company uses for its shoes according to a particular technique, developed at the end of the 1940s and patented for Red Wing. The company purchases hides that have been pre-processed with chromium salts and then tans them using mineral oil, hence the term “oil-tanned”. The procedure results in an oil content of 22% (8 to 10% is standard) and makes the leather exceptionally flexible despite its material thickness, hard-wearing and water-repellent. The quality of the craft corresponds to the high quality of the leather: Red Wing has its shoes mechanically welted using the complex Goodyear welt technique.