Men’s Flat Cap Made of Cotton 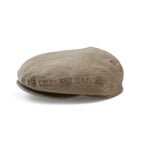 This cap in the style of a classic sliding cap makes so much with. It is crushable and rollable, and it can also be washed if the worst happens. The breathable outer material is so dense that the cap also offers good sun protection for the sensitive skin areas on the head: Mayser guarantees a UV protection factor of 80 (according to UV Standard 801, a realistic endurance test that recreates the Australian sun spectrum ). The look follows the gritty character of the cap; the grippy fabric shows a slight "used look".

When Leonhard Mayser opened his “Hut Macherey” in Ulm in 1800, he would hardly have guessed that Mayser hats would one day be a global brand, with an annual production of 3.5 million hats in 1963 (a record output that is unsurpassed ever since). Although the production figures are far lower today, Mayser can still call itself a global brand. Based in Lindenberg in the Allgäu, the former “Small-Scale Paris” of hat fashion, Mayser sells its hats in 44 countries. Despite all the changes, the secret behind the company’s success has remained the same over more than two centuries: quality. While the design, purchasing and sales departments are still based in the Allgäu region, Mayser relocated its production in 2002. The brand runs its own manufactory in Slovakia now, staffed with personnel that was qualified in-house.