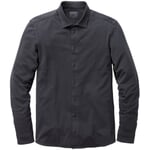 Puristic, no-frills shirt made of grippy jersey fabric: with Kent collar, without chest pocket. The buttons are made of corozo, a material obtained from the seeds of the corozo palm, also known as stone nut. The torso hem of the shirt is rounded.

From the origin. Blue de Gênes

Long ago, dockworkers in Genoa wore work clothes made of a strong cotton fabric dyed with indigo. Since Genoa belonged to France at the time, this went by the French name "Bleu de Gênes", which in English-speaking countries became "Blue Jeans". Against the backdrop of this history, the Blue de Gênes label was launched in Kolding, Denmark, in 2010. But Ole Madsen, the mastermind behind it, has long since gone beyond jeans. He manufactures authentic clothing from selected materials, whose timeless design literally endures the years. Production takes place almost exclusively in Europe, with Blue de Gênes working with small, family-run businesses that are each specialists in their field. Thus, the jeans come from northern Italy, some pants from Turkey and the shirts from Portugal.

95% cotton, 5% elastane. Stone walnut buttons. Made in Portugal. Back length in size L = 79 cm.
More articles of the manufacturer:
Have a question?