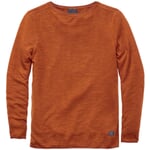 Men's long sleeve shirt
Brownred
In stock, Delivery in 6-7 days
For a delivery in time for Christmas please note the different "order by dates" in "shipping costs"

Very light summer sweater, which consists of a good two-thirds of skin-friendly cotton and just under one-third of cooling linen. The knitted fabric shows a beautiful melange effect. Fine rolled hems form the finish at the neck, sleeves and torso.

Long ago, dockworkers in Genoa wore work clothes made of a strong cotton fabric dyed with indigo. Since Genoa belonged to France at that time, it was called "Bleu de Gênes" in French, which in English-speaking countries became "Blue Jeans". Against the backdrop of this history, the label Blue de Gênes was launched in Kolding, Denmark, in 2010. But Ole Madsen, the mastermind behind it, has long since gone beyond jeans. He manufactures authentic clothing from selected materials, whose timeless design literally outlasts the years. Production takes place almost exclusively in Europe, with Blue de Gênes working with small, family-run businesses that are each specialists in their field. Thus, the jeans come from northern Italy, some pants from Turkey and the shirts from Portugal.