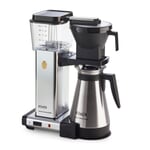 This coffee machine, which has been manufactured in Holland for over 40 years and is widely used mainly in Scandinavia and the USA - the Moccamaster KB 741 - can first of all do one thing: brew a very good filter coffee. The fact that it tastes like it was brewed by hand is no coincidence: The entire design (and not just a temperature-controlling minichip) is designed to recreate the process of hand brewing by machine. The water is quickly brought to a bubbling boil by a powerful copper heating element (rated at 1,450 watts), and then directed through a metal tube to the filter, where it hits the coffee grounds at an optimal 96 °C. The water flows out of 9 outlets, each with a different temperature. It flows out of 9 outlet ports over a large area, brews the coffee optimally, and then extracts 10 cups of coffee from it within about 6 minutes (smaller quantities faster). The machine has won many awards in the almost fivedecades of its existence, and the American Magazin Wine Spectator chose the Dutch producer in 2002 as the "manufacturer of the best coffee machines in the world".

... on the other hand, the technology: everything repairable and replaceable

The machine follows, easily recognizable, a different principle than the usual today: All wearing parts are designed for easy accessibility and quick replacement. You can see it when you take off the hard paper bottom fixed with screws and take a look inside the machine. Everything is screwed down and nothing is encapsulated. What's more, there is no electronic part whose premature demise would render all repair efforts futile anyway. Accordingly, the manufacturer still repairs and overhauls machines from the 1980s. (But since you can also purchase all spare and wear parts through us, this can also a status-conscious electrician in your neighborhood.)