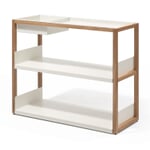 Oak Shelf Basic Frame
Small
Can be delivered at end of January, Place your order now

A Range of Frames.

You are free to combine the frames and different inserts of this shelving system in whatever way you see fit. We offer the base frames made of matt lacquered oak wood in three heights, all of which are 1.06 m wide and 35 cm deep. You can choose between three-level (height 80 cm), five-level (156 cm) and six-level frames (193.5 cm).

A Range of Inserts.

The separately offered inserts are made of 1.5-mm-thick sheet steel, powder-coated in cream-white. The bookshelves (with lateral upturned edges) always fill the entire width of the shelf; flat shelves and trays, however, are available in full (1/1) and 2/3 width. The two boxes (one 11 cm, one 22 cm high) both fill 1/3 of the shelf width. You are free to combine the inserts according to your needs. Precisely fitting folded edges hold the inserts in place; however, you can remove the boxes and trays with their contents from the shelf and carry them to your workplace. The sheet steel of the inserts holds magnets and provides additional space for attaching messages.

The most common ways of keeping a household habitable include sorting and specialization. Size and shape of an object determine its location in the apartment. Therefore, there are specialized shelf systems for the library, kitchen, wine storage, and cellar rooms. This shelving system is different. Designed from the outset for heterogeneous objects, it holds within reach whatever you deem essential. Therefore, its design is not only about maximum storage space, but about variety and flexibility – for there are large and small, long and short, simply put: highly differently shaped things to store. What’s special about this shelving system is that, besides the shelves, it holds deep trays and boxes of different volumes which add additional depth to the storage capacity of the whole construction.

The chaos marking the beginning of the world, as the Greeks imagined it, was a gaping emptiness. Nevertheless, the gods themselves tried to form out of it a well shaped, ordered cosmos, in which life could exist. They were partly successful despite the resistance posed by conditions on earth. The individual’s struggle to ward off chaos is much more difficult: he finds, in the best case, emptiness in a new apartment, but soon, and, time and time again, she finds herself surrounded by chaos in the modern sense of the word – by an unordered mix of disparate objects. So, everyday life becomes a strenuous battle, with the perpetually demanding goal, to form out of chaos a functioning cosmos, an inhabitable household.