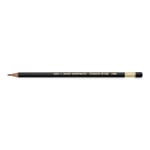 All-rounder for writing and sketching.

Optically, these classic, wood-cased pencils from Toison d’Or resemble the lead holder of the same name (item number 70667), which we have carried in our product line for years. We offer them in the three medium grades 2H, HB and 2B, which are suitable as an all-rounder primarily for writing, but also for (pre-)sketching.

”A pencil – if you should produce it from scratch! Imagine humanity is gone, and you have to make a pencil yourself – it’s magic!“ (Arno Schmidt)

The history of the modern pencil begins with the discovery of the first English graphite mines in the 17th century. However, with success came a problem: The pencil leads were cut from massive material, and the resulting pieces were a luxury. That changed when the Frenchman Nicolas Jacques Conté and the Austrian Josef Hardtmuth developed a ceramic process to produce pencil leads. At the end of the 18th century, they began to mix graphite dust with clay and fired the leads in an oven, with the amount of clay and length of time in the oven determining the hardness of the lead. The advantages of this mixture made history: With the high level of stability, it became possible to write with a vertical tip, with satisfying smear resistance, that was relatively impervious to fading. And a welcome opportunity for the writer emerged: upon sober reconsideration, one could erase what one had written.

The history of the renowned pencil manufacturer Koh-i-Noor dates back to the 18th century. Throughout the world, Koh-i-Noor became known through the innovative invention of Joseph Hardtmuth, who in 1792 developed a novel method for pressing and baking pencil leads - mines did not have to be cut from the solid stone any longer. This innovative ability has been preserved at Koh-i-Noor to this day.

12 pencils from Koh-i-Noor in a shaft made of lacquered cedar wood. Made in the Czech Republic. Supplied in a folding box. Available in three gradations.
More articles of the manufacturer:
Have a question?