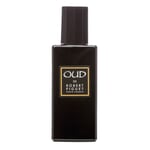 Robert Piguet. From Couturier to Perfumer.

As the scion of a banking family, Swiss-born Robert Piguet was destined for a professional path into banking. To the dismay of his parents, however, their 19-year-old son left for Paris to pursue a career in fashion. After years of apprenticeships with haute couture designers and fashion labels, in 1933, he established a salon on his own. With success: Just five years later, Piguet moved to one of the coveted addresses on the Champs-Élysées and eventually became one of the renowned couturiers of his time. Alongside designing for the Haute volée, he followed his passion for fine arts and created costumes for numerous artists on and off the stage. Extravagant yet reduced-to-the-core cuts characterised his fashion. Eventually, the perfectly tailored suits made of fine grey flannel became his trademark. Since then, several of his apprentices have made their way to the major labels in the industry or founded renowned brands, such as Hubert de Givenchy or Christian Dior. In 1951, Robert Piguet closed shop without having found a successor. Only at the beginning of the new millennium was a new owner found and revived the brand. What’s more, they were able to win over the renowned perfumer Aurélien Guichard to continue the Piguet tradition.

The style of his fashion – elegant and reduced yet extravagant, sometimes combined with lavish opulence – also characterises the perfumes from Robert Piguet. An entire series of fragrances originates from a collaboration with the perfumers Germaine Cellier and Francis Fabron starting in 1944, including Bandit, Fracas, and Visa. These three alone quickly progressed to must-haves in any range of the exclusive department stores in the metropolises. Perfumer Aurélien Guichard has reissued them for Piguet and added new compositions to the range. Still made in France, the characterful fragrances come with a high perfume content, impressively intense and long-lasting.

Eau de Parfum for women in a 100 ml glass flacon with atomiser.
Have a question?