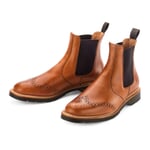 Solovair Men’s Boot
Brown
Sold, No longer available
Please note that unfortunately we cannot deliver to all countries at the moment.

We offer this high shoe from Solovair featuring the nearly incomparable comfortable and robust sole. It exemplifies two hallmarks of British shoe fashion: It comes as a Chelsea boot with elastic side panels, and it has the Lyra perforation on the front of the shoe, the characteristic broguing pattern in which two up and down holes in a line precede and follow a larger hole in their middle.

Solovair shoes come from Northamptonshire in central England: They're named after the so-called sole of air and recall optically and functionally not coincidentally another British shoe institution, namely Dr. Martens. At the beginning of the 1960s, NPS, the manufacturer behind Solovair, had the technical capability to produce the air cushion sole developed by the Austrian, Dr. Maertens (anglicised to Dr. Martens) whose patent was held by the R. Giggs Group. Both joined forces, and NPS went on to produce Dr. Martens shoes under license until the mid-1990s. Since 1995 NPS is producing the shoes on their own account with the same trusted machines under the brand name Solovair.

Uppers made of 1.6–1.8 mm thick cow leather, vegetable tanned. Lining made of vegetable tanned calf's leather in the shank and 100% cotton in the toe cap. Side panels furnished with rubber and donning loops on top of the shank. Insole made of Texon, outer sole made of rubber (Solovair Soft-Suspension).
Have a question?