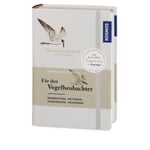 Vogel-Beobachtungsbuch
In stock, Delivery in 6-7 days

Always with you. The observation book

Even if in ornithology today much runs digitally: The handy observation book, which belonged until a few years ago to the basic equipment of every observer, still has its sense - not only because it sharpens, for example, the eye for identification details when you create observation sketches in the field. Kosmos-Verlag has published such an observation book for the jacket pocket, bibliophilically designed, with rubber band to close and integrated ribbon and above all with surprisingly much space for own entries. The first 120 pages offer space to record your own observations in writing or in sketch form. On the following species list with all bird species of Europe, seen species can be marked and observation sites for each species can be entered. The migratory bird calendar gives information about when which migratory bird species can be found in our country or when they pass through. In the chapter Topography and Clothing, the most important plumage parts and body parts of the bird are clearly described, which is very useful for field notes and sketches on species that one cannot identify oneself. The conclusion is an alphabetical index with German bird names and their English equivalents.