Wall Lamp Made of Bone China 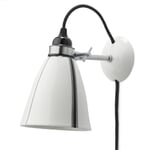 When switched off, the shades are bright white; when switched on, they shimmer silkily and warm in colour. At BTC’s, an experienced employee decorates the lampshades by hand with the different line patterns. Bowles hired her when her previous employer, a big player in the industry, gave up hand-painting. Since then, Bowles has been making the hand-painted lamps simply because he wants to and his employee can.

British, in Detail. Lamps from BTC.

Lamps made by BTC (= British Timeless Classics), in the vicinity of Oxford, have attained the status of timeless classics. The creative spirit and driving force behind the firm is Peter Bowles, who pursues his very clear idea and just as clearly realises his agenda. The process starts with the manufacture: Bowles wants to produce lamps that are British down to the level of detail. For example, the bone china-lamp shades come from a pottery in Stoke-on-Trent, known as the "the Potteries" because of the almost 500 potteries that used to be located there. Almost all are gone today and the firm, which also belongs to Bowles, would not exist except for BTC. He took it over when it was on the brink of bankruptcy and has restructured it while keeping all the employees. The hand-blown glass domes come from a glass blowing shop in Worcestershire which Bowles also bought. In addition to domes for lamps, the shop produces coloured glass windows for historical buildings and churches. A handful of glass blowers with their two small smelting furnaces practice the methods of glass blowing and uphold the once famous English tradition of this trade. The British manufacture of the lamps extends to the cables, too. Bowles was dissatisfied with the plastic wrapped cables on his first lamp, so he used a locally produced cloth wrapped cable from a clothes iron for his exhibition piece. The reaction was so positive that he has used cloth cable since. They are locally produced near the firm in home-based work.

Shade made of bone china, Ø 12.2 cm. Tube made of aluminium. Plastic socket E27 (max. 40 W). Mounting material enclsed. Delivery without a bulb.
More articles of the manufacturer:
Have a question?