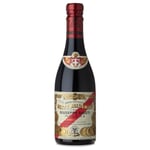 The "Banda Rossa" comes with a proportion of 70% vinegar aged for at least ten years from the barrels of the Giusti family, which can be called almost antique, in addition it receives a proportion of grape must and finely aged wine vinegar. Approx. 6% acidity. With recipe sheet.

You can not actually praise enough this beneficial substance, which nature develops even without human intervention from alcoholic liquids through fermentation. It is a food, seasoning, preservative, cleanser, personal care and hygiene agent. And in its mature forms, created when a higher quality base (than the usual spirit) and slower fermentation are chosen, it is a rare delicacy. The range of flavors here is as wide as the variety of different fermented fruits and wines.

For Us there is an Undisputed Number One Vinegar: Aceto Balsamico di Modena from Giusti.

When you take a closer look at the area around the Emilian city of Modena, it becomes clear why, in particular, this region became the centre of a vinegar culture that turns decent vinegar varieties into outstanding ones. On the one hand, the region offers good climatic conditions: alternating hot summers and cold winters put the vinegar bacteria into maximum productivity. On the other hand, the grapes that grow around Modena – Trebbiano and Lambrusco – are perfect for producing vinegar. The “Aceto Balsamico Tradizionale di Modena” is the one at the top end of the vinegars from Modena. It is made from nothing else but grape must, thickened by prolonged boiling down. It matures for many years in barrels made of oak, mulberry, chestnut, cherry, juniper, and ash wood, becoming more concentrated and absorbing aroma from the different woods. In the process, the vinegar gets handed down (comparable to the solera process in sherry) in barrels with contents of increasing age. Only a portion of the contents is taken from one barrel and poured into a smaller one. The general rule is: The vinegar from the smallest barrels (30-40 litres) with the oldest contents – and no more than a quarter of the precious liquid– is bottled. In this way, the vinegar “travels” through the entire barrel system and continuously blends with the long-matured contents. This principle guarantees the consistently high quality of Aceto Balsamico Tradizionale di Modena. By its very nature, the absolute age of such a vinegar cannot be precisely determined as the centuries-old barrels contain quantities of vinegar that were produced decades ago. The Aceta Giuseppe Giusti has been working according to this sophisticated artisan process based on age-old traditions since its foundation in 1598. We have been offering its balsamic vinegar since our No. 1 product catalogue. After several tastings over the years, our verdict remains unchanged: It is – and remains undisputedly – the best for us.

250 ml bottle
More articles of the manufacturer:
Have a question?