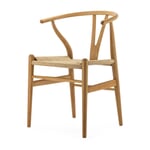 “A chair is a complicated object. Anyone who has ever tried to design a chair knows that. There are endless possibilities and many problems – a chair has to be lightweight, it has to be sturdy and comfortable at the same time. It is almost easier to build a skyscraper than a chair,” said Mies van der Rohe (1886-1969). As is well known, it did not stop him from designing chairs (and creating some classics in the process, most notably the Barcelona Chair in 1929). Nevertheless, his statement hits a nerve: the challenge he faced in the process is one that everyone is prone to discover who tries the same. And if, on top, a basic design idea – an aesthetic demand – goes into the mix, it becomes all the more complicated. Eventually, it is no surprise that the furniture market produces numerous “new” chairs year after year, but lasting classics are extremely rare among them.
We offer three models from a period that was very productive in this respect: the late 1940s and early 1950s. On the one hand, they represent (in the case of the “Y-Chair” or “Wishbone Chair” by the Dane Hans J. Wegner) the independent tradition of modern Scandinavian furniture design. On the other hand (in the case of Egon Eiermann’s chairs), they stand for the so-called “Second Modernism”. In post-war Germany, the design approach – and Egon Eiermann as a leading protagonist – successfully reclaimed the legacy of modern furniture design of the 1910s and 1920s Werkbund and Bauhaus design schools.

Admittedly, even the CH24 has ancestors. The chair is one of Wegner’s designs that owe their shape to his preoccupation with Chinese furniture construction. The seating furniture of the late Ming dynasty inspired him when he found the furnishings characterised by precisely what he tried to realise in his model chairs: a restrained-to-the-max design vocabulary and constructions that combine optimum stability with comfortable sitting. He took the basic idea of the Chinese Quanyi (internationally known as the “Horseshoe Chair”, recognisable by its strictly rectangular seat and its back and armrest curved like a horseshoe) and varied the design by inserting a filigree yet sufficiently stabilising Y-shaped element in place of the broad backrest-supporting backboard typical of the Quanyi. The CH24, however, is far more than a mere variation of a Chinese piece of furniture: To begin with, the construction of the substructure is unmistakably Scandinavian and lightweight. Furthermore, Wegner, who was always open to new, unusual materials, had the seat woven by hand from 120 metres of paper cord. The design of the CH24 dates back to 1949 and is by far Wegner’s most successful one. The chair, meanwhile well-known as the “Y-chair “or “Wishbone chair”, has been produced since 1950 – and still is – by Carl Hansen & Søn in Gelstedt near Odense. The Danes manufacture the classic chair – the process consists of more than 100 individual steps – in a number of pieces that keeps the price well below that of comparable style icons (and other Wegner models).

Master of the Chair.

Hans J. Wegner (1914-2007) designed more than 500 chairs in his long professional life earning him the title “Master of the Chair”. Wegner is undisputedly the great figure of modern Scandinavian furniture design. Renowned Design museums like the MoMa in New York and the Neue Sammlung in Munich present complete series of his chairs. So much for the mark, he left in design history. His organically shaped, exquisite chairs, preferably made of light wood, set the tone in Scandinavian furniture design for decades; today, they enjoy almost archetypal status. Contemporary Scandinavian seating furniture seems to stem from these furnishing forefathers, although some of the children and children’s children bear a suspiciously strong resemblance to Wegner’s designs.