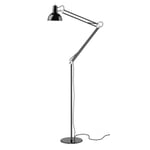 Balanced-Arm Floor Lamp by Midgard
In stock, Delivery in 6-7 days

The spring-loaded luminaire is today's widespread economy edition of the work lamps from the Bauhaus environment. In it, the complex joint constructions for inclination adjustment were economically replaced by well-functioning tension springs. Midgard also manufactures it as a veritable floor lamp - with the same details that distinguish the table lamps: strong, non-wearing tension springs, sturdy 12 mm square steel tubes, a steel base and a neat metal tilt switch on the shade.

Midgard. A Pioneer in Directing Light.

“Better work results, power savings, eye protection – all accounted for by Midgard’s adjustable turn-in lights.” Nothing less than that was the claim that the cover page of an old Midgard catalogue proclaimed full-bodied. Curt Fischer was behind the company founded in 1919 in the Thuringian city Auma. The engineer and designer held the world’s oldest patent for dirigible light and from the very beginning devoted a great deal of attention to every last component of each of his luminaires. In any case, his impulse to renew the traditional resulted in a mutual closeness to and sympathy with the Bauhaus avant-garde. In 1926, Midgard lamps, featuring the aesthetics of precise machines, unsurprisingly, were part of the furnishings of the newly erected Bauhaus building complex in Dessau. Decades later – after the company’s socialisation to “VEB Industrieleuchtenbau Auma” and the reprivatisation in the 1990s – Midgard’s long history ended in 2011 with insolvency. In 2017, however, David Einsiedler and Joke Rasch revived the traditional brand and set up a manufactory in Hamburg-Altona. Since then, production has remained there. And as before, it is still true: All Midgard luminaires are manufactured entirely in Germany.