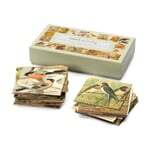 A Memory Game. With Bird Species.

Johann Friedrich Naumann (1780–1857) is said to have established the classification of birds as a discipline in Europe. His method was, first, to devote his energies to the taxidermy of birds – on which he published a book – and then to illustrate them. This he did with a touch that was both scientific and artistic. Naumann’s guiding principle was to ‘bring the birds to life’ in as natural a way as possible. He used copper plates, and achieved marvellous results. Unfortunately there aren’t many of these left. Instead, we’ve used for our Memory Game collotypes taken from the 1906 household edition of the ‘Birds of Europe’: these illustrations were made by a variety of artists, who in turn used Naumann’s copper plates as a basis.
We’ve chosen 20 different species, including the house swallow, crested tit, black woodpecker, barn owl, wren, starling and bullfinch, which a firm in Upper Franconia have made into this exquisite Memory Game, exclusive to Manufactum.