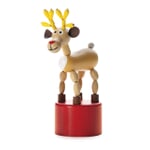 Bobblehead Reindeer
In stock, Delivery in 6-7 days
For a delivery in time for Christmas please note the different "order by dates" in "shipping costs"

Detoa has been manufacturing wood products in Albrechtice in the Czech Republic since 1908. In the 1930s they started producing so-called nodders or bobbleheads, still popular after almost 80 years. Two of the historical figures, the giraffe and the frog, were re-issued to celebrate the company's centenary. In addition to the original colour scheme, they feature the rectangular base which conceals the push button, typical for the time. The Santa Claus and the reindeer are relative newcomers.

Not suitable for children under three years of age. There is a danger of choking on small parts.

In Albrechtice, Czech Republic, Detoa has been manufacturing wooden products since 1908. In the 1930s, the company began manufacturing so-called wobbling or spinning figures, which have lost none of their fascination to this day. For the one hundredth anniversary of the company, two of the historical figures were reissued - the giraffe and the frog. They are presented not only in the original painting, but also with the square base that was common at the time, in which the push-button with indestructible mechanism is hidden. For several years, Santa Claus and reindeer are also in our assortment, but these figures are more recent.

A capable and thoroughly mobile assistant for Santa Claus: a reindeer made of white beech and maple wood, hand painted. Height 13 cm, base Ø 5 cm. Weight 60 g.
More articles of the manufacturer:
Have a question?