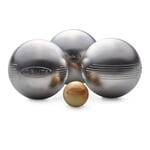 Boules Balls for Leisure Sports
(3 Balls)
With engraved stripes
In stock, Delivery in 6-7 days
For a delivery in time for Christmas please note the different "order by dates" in "shipping costs"

Of laying and shooting

The most popular ball game in this country - and commonly subsumed under "boule" - is undoubtedly pétanque, a variant of jeu provençal imported from France and launched near Marseille in 1910, which is played at shorter distances. Even the novice player quickly understands what the game is all about: on the one hand, placing one's own ball close to the target ball ("laying") and, on the other hand, worsening the position of the opponent's balls by hitting them away ("shooting").
Johann Christoph Friedrich GutsMuths, German pedagogue of Goethe's time and co-founder of gymnastics, already summed up in apt words how challenging and at the same time enjoyable the game with the balls is: "Throwing the balls requires an exact weighing of the strength of the arm, a proper estimation of the weight against the distance of the throw. If the playground always remained the same, its peculiarities would soon be known; but it changes with each new course, always appearing other depressions, elevations and canopies. The eye must spy these out, and they become an object of the judgment. To this is added, finally, the constant measuring of the distances of the balls. All this makes the game artful, useful and interesting, just as it becomes immensely entertaining by chance, which chases the balls sometimes this way, sometimes that way. It therefore deserves a fairly general reception among young and adult persons."

Experience Meets Curiosity. A game for young and old

Similar to archery, in the game of boules it is not only the physical fitness of the players that determines success. Rather, the combination of concentration, technique and experience is decisive for the outcome. So it is not surprising that petanque inspires many into old age, whether "Tête-à-tête" (singles), "Doublette" (doubles) or "Triplette" (triples). Often, it is precisely these experienced players who introduce the game to the next generation and tell them practical tricks.
In order to ensure that the young curiosity seekers also have lasting pleasure in laying and shooting, we also offer balls for juniors in addition to the competition and leisure balls for adults. The following applies to all "boules de pétanque": They should be adapted to the shape of the hand and the length of the fingers. To test, shape the palm of your hand into a hollow - all fingers should form a unit, with the thumb slightly angled against the index finger. Place the ball in the hollow and turn the back of the hand upward. If it remains well secured in your hand and does not fall down, the ball will fit; it is important that you can keep your fingers closed without cramping your hand. When throwing, all fingers should then release from the ball at the same time.

From the home of petanque. Balls from La Boule Obut

Whereas in the past the farmers of southern France used wooden balls studded with nails all around, today pétanque is played with pure steel balls. Our balls come from the French family business La Boule Obut, which has made a name for itself in leisure and competition circles since it was founded in 1955 and is the market leader.
La Boule Obut manufactures the "boules de pétanque" entirely at the company headquarters near Saint-Étienne (Loire) using proven production techniques. Shells are forged there from steel discs which, when assembled, make balls - the inside remains empty in accordance with the NF S 52-200 standard. The guideline states, among other things, that balls must not be filled with foreign bodies for safety reasons, as these could corrode due to moisture and cause the shell to burst. In order to achieve the necessary competition weight, quality manufacturers therefore rely on balls with a solid jacket. In addition to the weight, the hardness and material properties are also decisive for how a ball hits the ground and rolls. For example, our competition balls made of carbon steel, which are coated with a black oxide layer, bounce less because of their surface hardness and bounce less off hit balls than specimens made of other materials.

3 large boules balls (Ø 7.3 cm) made of stainless steel. Weight per ball 650 g. They come with one small ball made of boxwood, Ø 3 cm. We supply the boules balls in a fabric bag and with warranty cards.
More articles of the manufacturer:
Have a question?