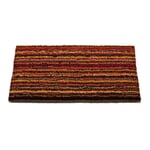 Coconut fiber is a renewable raw material from nature which, when processed into a door mat, is capable of playing out its positive material properties. The fiber can be dyed, but the colour is not completely light fast and may rub off on sensitive materials. Similar in construction to a tube, the coconut fiber is highly elastic and absorbs moisture in high humidity until the humidity is low again. In doing so, the fiber contributes to a balanced indoor climate.

Past and Future. A Time Travel with Schär’s Coconut Weaving Mill.

The coconut weaving mill was once widely used in the industry throughout Europe, and particularly in Germany; today, there is hardly a trace of it remaining. At the company, August Schär KG, the original production method has been preserved as if it remained in a time bubble. This happened not because of a museal attitude, but because modernization delayed so long until these old machines and this technology are being desired once again. The workshop, found in the idyllic Eisenschmitt in the middle of the Volcanic Eifel, has been active for over 75 years manufacturing coconut fibres for high quality carpets and mats for industry, trade, and private households. When most other coconut weaving mills had to discontinue their business, Schär was able to expand its stock of old machines, which is why the business, from a technical standpoint, is secure for the long term. While coconut fibres are somewhat awkward in their production, they exhibit genuinely unique qualities. Products made from them hold for ages; they harmonize the room temperature due to their ability to store excess air moisture. As well, they do not attract dust, and they are low maintenance. Because coconut fibres are exposed in the outdoors to extreme conditions, they form a corresponding high level of resilience. Coconut is anti-bacterial, not readily flammable, sound- and heatproof, breathable, and antistatic. Dyed products should not be continually exposed to high levels of solar radiation. Carpets made of coconut fibres have a rustic surface structure; irregularities in the thread are unavoidable and give the product its unique charm. Foot mats for house entrances belong as well to the line of products from Schär, just as the red carpet is obligatory for an official reception in many countries. Schär’s employers work at mechanical production facilities that are no longer encountered in Germany. The coconut products are desired due to their lengthy durability and their insensitive nature. Schär receives its natural coconut fibres from India and Sri Lanka; further production, which includes colourising, constructing with the weaving loom, the actual weaving, and the final cutting and finishing, takes place in the company’s sewing room.

From Schär: the traditional type of weave in coconut velour generates a tremendously thick, coarse carpet that reliably collects not only dirt, but also dust. We offer a standard format and one with enough area for large entrances and big feet.