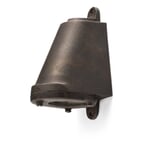 Using the lost mold sand casting process, a small foundry in the Black Country, the ore and coal region of the West Midlands, produces the bronze or aluminum bodies, and the lights are assembled at Davey Lighting in the Cotswolds. Luminaires of this type were originally used to light the decks of ships. It is to this function that they owe their streamlined shape, as neither rope nor rigging were allowed to catch on them. The housings are as robust as was indispensable in the maritime environment - the deck lights had to withstand even the heaviest weather and hitting parts at sea. Away from their former purpose, the deck lights today mostly illuminate front doors or walkways.

Davey Lighting. Luminaires made in England

The roots of Davey Lighting go back to London's West Indies ports, where the hardware and ship lighting company (then called Davey & Co) began operations in 1885. Soon its functional lights were in use on many ships. As the glory days of British seafaring faded in the 20th century, Davey used the skills he had acquired over decades to produce what were originally maritime lights for use on land - initially in industrial and commercial settings.
However, the range was soon taken up by architects and designers, which is hardly surprising, since Davey's luminaires are still distinguished today by what characterized them even in their founding days: a clear design language oriented to purpose, a robustness conveyed through the choice of materials, and a workmanship with attention to every detail that was indispensable for the original use in maritime or industrial environments. From the cast iron, to the turned or pressed metal parts, to the hand-blown glass domes, all components are made by specialized craftsmen in England. Even the textile-covered cables that equip some of the lights are made near Davey's current headquarters in the Cotswolds.

They originally lit up the decks of ships: made in a forgotten form of sand casting in a small foundry in the Black Country, the ore and coal district of the West Midlands, the main body is made from bronze or aluminium, the assembly of the lights is performed at Davey Lighting in the Cotswolds.
Body cast bronze, dark patinated. Weight 1.5 kg.
More articles of the manufacturer:
Have a question?