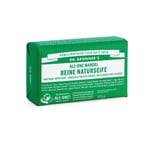 Dr. Bronner’s Soap Bar
Almond
In stock, Delivery in 5-6 days
Please note that unfortunately we cannot deliver to all countries at the moment.