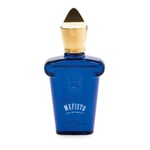 From the very beginning, exclusivity has been the trademark of “La Fabbrica di Profumi C. Casamorati”. The indulgent scents and soaps of the fragrance manufacturer were highly esteemed in Italian noble circles, and, eventually, the fragrance compositions from Bologna received several national and international awards. Even the Italian Queen Margarethe was so taken with them that she awarded Casamorati a golden pin to signify her appreciation. Almost 120 years later, the fragrances are no longer available, while anything but yesterday’s news. That is why, in 2004, the Turin-based fragrance house XerJoff decided to revive the perfumers’ art of the late 19th century. XerJoff’s Casamorati collection comprises a total of eleven fragrances based on traditional formulae, carefully refined and made from natural, pure materials. The compilation presents the fragrant heritage of yore, each scent in a fancy, handcrafted flacon. By now, you find some of the exclusive fragrances for women and men with us.

An unusual, extremely fresh and floral men's fragrance that quotes classic Italian eaux de cologne with its heart accord of rose and iris, but takes a distinct turn towards the opulent oriental with its base of cedarwood, sandalwood, vanilla, musk and amber. The bright citrus notes of grapefruit, lime and bergamot in the top note, rounded off with lavender, create a lively framework.
30 ml glass bottle
More articles of the manufacturer:
Have a question?