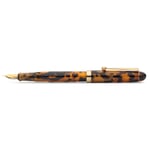 Fountain Pen Cellulose Acetate Tortoiseshell
In stock, Delivery in 5-6 days
For a delivery in time for Christmas please note the different "order by dates" in "shipping costs"

Ohnishi turns the three parts required for the fountain pen (barrel, head piece and cap with thread) largely freehand in several work steps from candy or rod material - he even cuts the thread freehand. Finally, all surfaces are ground and polished. The fountain pen is equipped with an ink feed system and a gold-plated steel nib made in Germany. Due to limited availability, it is only available in nib width M. It can be used with a converter (included) as well as with standard ink cartridges.

Just as writing and reading were once the preserve of only a few, writing instruments such as the fountain pen could initially only be afforded by the better-off. Already more expensive to manufacture than simple nib pens or pencils, which soon became accessible to the masses thanks to new manufacturing processes, the demands on materials and workmanship also increased. The proximity of jewelry and writing instrument production, for example in Birmingham (Yard-O-Led) or Pforzheim (Waldmann), is therefore not surprising, nor is the use of silver for the barrels of fountain pens.
From the 1920s, for example, people began to use recently developed plastics such as ebonite, galalith and celluloid or cellulose acetate for writing instruments instead of expensive metal - with great success. However, these materials were soon imitated even by cheap thermoplastics. As a result, many writing instruments are now inexpensive and affordable for almost everyone, but the old plastics are hardly ever used anymore, even though they offer far more in terms of feel and appearance than the new ones.

Writing Instruments by Ohnishi Seisakusho – Made of Hand-Turned Cellulose Acetate.

One of the very few left who masters the art of hand-turning barrels for writing instruments is the Japanese Keizo Ohnishi. He learned the old technique from master Kiyoshi Kato, known as a kind of grandmaster of writing instrument manufacture, and took over Kato’s workshop when the master died. At the still operating workshop, Ohnishi continues to produce fountain pens made of cellulose acetate – entirely by hand and, therefore, in minimal quantities. Ohnishi uses a classic black-brown cellulose acetate, reminiscent of tortoiseshell and horn in terms of look and feel, for producing the fountain pen and a pencil holder (a relatively unknown utensil in our latitudes) complete with screw cap and clip. The material feels pleasant and never cold to the touch while impressing with astonishing visual brilliance. The material’s surface is not sensitive to scratches but self-polishing. Besides, the marbling looks different in every writing instrument. Discovered in 1865, cellulose acetate (along with celluloid) is one of the oldest thermoplastics. Among the plastics made from a natural product, the material has been the most important plastic from the 1920s until today. In fact, as a derivative of cellulose, the material is one of the bioplastics.