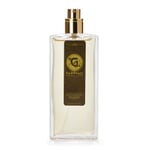 Gaglewski calls this straightforward fragrance essentially masculine. The composition is appropriately spicy, containing essences of juniper wood, birch and myrrh, evolving from initially slightly petrol and smoky notes to an exceptionally idiosyncratic fragrance that is at once fresh and dynamic. Top notes are dominated by basil, heart notes by nutmeg and galbanum resin, base notes by cedar and sandalwood.

Didier Gaglewski came to perfume like a virgin to the child. When his amazing aroma sensitivity became apparent during a wine seminar, he was advised to go into perfume making. Without a second thought, Gaglewski gave up a well-paid job in commerce and moved to Grasse. In the city of perfume, he completed a thorough apprenticeship in a long-established perfume house, training his nose for several years. Only then was he allowed to set about putting together fragrance compositions himself. In 2008, he finally founded his own business. Since then, he put all his efforts into creating stand-alone perfumes - made to the greatest possible extent from natural essences. Many of the plants he uses, often plant species with an ancient heritage such as the centifolia rose, are self-cultivated; few are bought in.

Preferentially, Gaglewski uses extracts obtained by the traditional and elaborate “enfleurage à froid” (i. e., cold method) for his fragrances. This process starts when freshly harvested petals forming a layer on purified, odourless vegetable fat give off their fragrances. After a few hours, new petals replace the older ones until the fragrances completely permeate the fat. The process may take up to three months and results in highly refined, pure flower oils carrying a particularly intense scent. When ultimately composing the perfumes, Gaglewski recreates these oils using the best fragrance essences from Grasse in the manufacturing process. The perfumes’ base is pure alcohol; you find the intensely scented oils dissolved in this base. The fragrances are free of preservatives.

Eau de Parfum for men.
50 ml glass bottle with atomizer
More articles of the manufacturer:
Have a question?