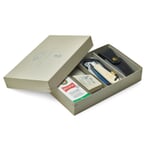 To give away. The famous anchor knife.

Among the pocket knives of the Otter forge in Solingen, the anchor knife has long been one of the classics. It can be recognized by the brass anchor, which is set into the knife handle made of bone and ground flush, and by the blued horseshoe blade made of carbon steel - for the pulling cut. We offer the anchor knife here in a gift set that includes a matching leather holster, a piece of Belgian chunk as a sharpening stone and Ballistol universal oil for knife care.

To reduce stresses in the steel and thus prevent the material from breaking, steel is often blued (also known as tempered) after hardening. For this purpose, the material is heated and then cooled again - the hardness of the steel decreases somewhat, but at the same time it loses some of its brittleness and becomes tougher. During bluing, the material surface oxidizes and, depending on the tempering temperature, special tempering colors are formed. From about 300 °C, for example, a bluish color develops, as can be seen on our anchor knife.
Otter has been making cutlery since 1840, and still relies primarily on handcrafting.

The blade of the knife is surface blued. The blue sheen may diminish with use over time.