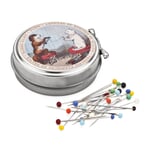 Maison Sajou: the Revival of an Old Tradition.

An old, much-loved French make: ‘Maison Sajou’. The firm was founded in 1830 and quickly established itself as the best address in France (and beyond) for delightful small domestic articles (e.g. for sewing). The founder, Jacques-Simon Sajou, won numerous First Class medals in various world exhibitions of domestic craftsmanship in the 19th century. In modern times, Madame Crestin-Billlet, an admirer and keen collector of Sajou’s work, especially his needlework pattern booklets, started to work on a series of handicraft manuals based on his ideas and found to her surprise that the brand name ‘Sajou’ wasn't in use since the 1950s. So she took the logical step of reviving the name and the business; her ‘Sajou’ products do honour to the name ‘Maison Sajou’ and its tradition.

The glass heads of these pins are made of real Murano glass: For the production Murano glass bars with a diameter of 3 mm are melted. Then the molten glass drops onto the pin and hardens.

The pins are made of nickel-plated, hardened steel. The heads are made of Murano glass. Approx. 60 pins in a white sheet steel box.

Length of each needle 3 cm, diameter 0.7 mm.
More articles of the manufacturer:
Have a question?