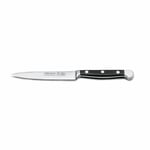 Güde Office Knife
POM
Can be delivered at middle of February, Place your order now

Apart from the chef’s knife, there is another extremely versatile kitchen knife: the office knife. Probably there is no type of knife that is used and appreciated in so many households. The office knife has long since earned the name of being a real jack-of-all-trades when filigree cutting work is pending. Because it is always used where bigger knives are considered unwieldy. The office knife is usually used whenever vegetables are cut, decorations are made for the table and food is cleaned and roughly minced. Tomato skinning, fruit peeling or even meat cutting can all be part of his job. In addition, it is used in the separation of tendons of the roasting, in the skinning of poultry or in the removal of fish. Even the opening of a pheasant or quail egg is a job for the office knife: it delivers a straight cut and thus causes no loose breakage of the shell.

At the end of the handle, you find a second bolster. The extra weight shifts the center of gravity of the knife backwards, giving it a superior balance. These forged kitchen knives come from the Solingen factory of Franz Güde, who founded his blacksmith workshop in 1918. All Güde knives are made of stainless steel, ice-hardened (56 HRC), hand-pulled and hand-sharpened.

Care instructions:
Clean the knives immediately after use with a damp cloth and dry directly.

Grip plates made of POM or plum wood.
Manufacturer:
Have a question?