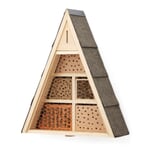 Wherever possible and reasonable, we make a point of improving our products. Take our insect house, for example. At its manufacturer in Saxony, we have already commissioned a small renovation for the second time. Because we thought it was a good idea to make it even more difficult for the woodpecker in your neighborhood to access the nesting and brood passages of the house. After all, the woodpecker gets into (almost) every gap with its massive chisel beak in search of food - and, as you have let us know several times, even behind the bird screen made of galvanized steel wire. Therefore, we have had the frame of our insect house further deepened, so that the distance between the grid and the individual "rooms" of the house is now in any case more than a woodpecker beak length.
specialCharacterLineBreak_hard The roof ridge has recently been reinforced by an angle made of metal to prevent damage to the roofing felt - and subsequently the penetration of rainwater and moisture. Unlike previous models, the Poroton tile is now filled with reeds. And: the butterfly dwelling in the gable is no longer covered by the bird screen to make it easier for the butterflies to move in.
specialCharacterLineBreak_hard On the other hand, we have left what could no longer be improved as it was. Thus, the wood block is still made of the hard wood of beech. This is because it is almost impossible for protruding chips to come loose, which could injure the animals and their delicate wings. In addition, all drill holes are made in two careful steps across the grain and the drill holes are smoothed very cleanly to eliminate any risk of injury. The same conscientiousness is applied to the clay brick mixed with straw.

Frame made of spruce wood with a renewable cover of roofing felt and ridge made of metal. Removable wire mesh made of galvanized steel wire. Filling made of beech wood, clay, reed, poroton tiles and spruce wood. Made in Saxony. Height 55 cm, width 45 cm, depth 16 cm. Weight 8,6 kg.
More articles of the manufacturer:
Have a question?