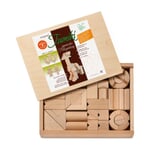 Building blocks are certainly among the first children’s toys. Since they have been around, they have changed very little – until Tsumiki (Japanese for building blocks) reached Japan, where the designer Toshiaki Yamada fashioned them with discrete but effective notches to couple the blocks to each other. With this small modification, together with unusual shapes like angles or arches, they go beyond simple stacking, seeming to defy the law of gravity as they aspire to veritable sculptures, without any fasteners or connecting pieces. The blocks are made in the Erz Mountains in Saxony.

The blocks are not suitable for children under the age of 3 because of the danger of choking on the smaller blocks.

The most original of all children's toys are probably building blocks - hardly a child who would not have discovered the laws of statics and gravity when playing with them, when when the last element is placed, the just created structure collapses with a loud roar. As long as the blocks have existed, in the always proven shapes such as cube, cuboid or cylinder, so little has been changed about them, at most the colors or the material - until they made it to Japan during the Meiji period, when the country began to establish diplomatic relations with Europe and the USA. There, more than 100 years later, designer Toshiaki Yamada added inconspicuous, but all the more effective notches to the tsumiki (Japanese for building blocks).

Beyond the simple stacking on each other, the blocks can now, seemingly defying all laws of physics, be built into veritable sculptures, completely without fasteners or connecting elements. The only thing that holds the blocks together is the notches.
Thanks to this simple modification and rather unusual shapes such as angles or arches, the game becomes a challenge for fine motor skills, coordination and spatial imagination - and quickly keeps the whole family busy, on the one hand because sometimes more than two hands are needed, and on the other because several can be built from the outset.
Made the wooden construction kit in the Erzgebirge from untreated beech wood.

34 building blocks made of untreated beech wood. They come in a wooden box with a sliding lid, L 25,5 x W 19,5 x H 4,5 cm. Weight 1.1 kg. With instructions and many construction examples.
Have a question?