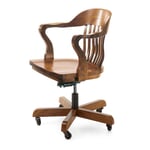 Jasper Chair No 980
In stock, Delivery by transport company in 2-3 months
Only small amount in shop

From the USA. And From the Courtroom.

The Jasper Seating Company, Inc. was founded in 1929 in southern Indiana, an area where, because of its abundance of forests, German cabinetmakers settled in the 19th century there and established a centre of handcrafted furniture making. Jasper maintains its own forest and sawmill and prides itself on its wood steam bending technology. The most famous Jasper model is the 980 chair, an imposing armchair with a rocking mechanism. Its backrest, along with its struts, armrests and seat, is impressively anatomically modelled. The steam bending takes the timber to its stress limit, especially in the backrest – which almost inevitably leads to cracks or gaps there, but this does not noticeably affect either the seating comfort or the chair’s durability. For decades, judges and jurors took their seats in it; now, the film industry exploits its awe-inspiring effect when depicting the American court system. In addition to courtrooms, Jasper Chairs are so common in American libraries that they are often called “Library Chairs” in the United States.

Comes with a rocker mechanism. The Jasper 980 is made of solid, brown-stained, clear-lacquered oak wood (origin USA). Seat height adjusteable between 42 and 50 cm. The seat is 50 cm wide (front) and 40 cm deep. Required standing surface approx. 79 cm Ø. Made in the USA. Overall height 81 to 89 cm. Weight 21 kg. Max. load weight 135 kg.
More articles of the manufacturer:
Have a question?