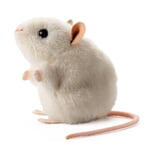 Of white mice and men

White mice were considered sacred animals and lucky charms in ancient Crete, some of which were cared for in special temples at state expense. In Sicily, Greece and Asia Minor, mice were even used to question the gods. It is also often said that white mice appear to those who "question" bottles of spirits instead of the gods. This does indeed happen, but only in delirium tremens, in which hallucinations throw random images onto the retina. And according to a statistic - there are also in this field - these are actually white mice in five out of a hundred cases. Our white mouse, on the other hand, is very real, exceedingly fluffy, without having side effects, and maybe it even turns out to be a lucky charm.

Genuine stuffed animals made in Bad Kösen are collector’s items, but what they are actually made for is life in a nursery. Up to 100 parts are necessary to make a Kösen animal with securely fastened safety eyes and stuffing of non-flammable silicone hollow fibre (in case of the teddy bears and the larger specimen, they also add some plastic granulate for anatomic accuracy). Unlike many other manufacturers, who mostly use materials made in Asia, they stick to plush that comes from weaving mills in Germany, Belgium and France. It has a firmer quality and can thus be sewn more tightly – ultimately the reason for the animals’ durability. Besides, this plush fabric is resistant to hair loss. The Kösen animals are among the finest you can find, not only in craft but also in design. For every model, thorough studies of anatomy and movement are conducted in the animals’ natural environment or at the zoo; blueprints and clay models follow. Thanks to the co-operation with the neighbouring Burg Giebichenstein, a well-known training centre for product design in Germany since the beginning of the 20th century, the Kösen stuffed animals have won several design prizes.

Woven plush, origin in Europe. Made in Germany.
Height 9 cm. Weight 95 g.
More articles of the manufacturer:
Have a question?