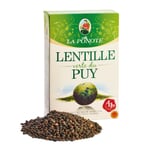 Green and Good. Lentils from the Auvergne.

The "lentilles vertes" from Le Puy, with their aromatic, slightly nutty flavour, deserve the praise of the chefs around the world. It is a delicacy based on an imperfection: in the presence of abundant sun, favourable winds and moderate rainfall, the lentils from Le Puy do not ripen to the fullest. Their starch content is lower, and they feature a thin husk. Without soaking, they are cooked within 20 minutes. As one of the starting points for the pilgrimage route of the Camino to Santiago de Compostela, Le-Puy-en-Velay has always been an important cultural centre. The diocese with over a thousand years of history is today a secluded place at a height of 625 metres in the southern Massif Central in the southeast of the Auvergne. However, the city is known for its lentil specialities. The main ingredient flourishes particularly well in the volcanic soil of the region.