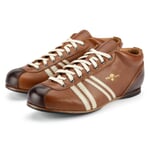 The company was reinvented just twelve years ago, but the Zeha history goes back one hundred years. It is named after the phonetic spelling of the initials of the founder Carl Häßner in German "Ze" for the "C" and "Ha" for the "H": Zeha. The Zeha shoe was the shoe of choice among the Berlin avante-garde in the 1920s. In the era of the GDR the firm was socialised and got the name "Volkseigener Betrieb (VEB) Spezialsportschuh Hohenleuben", or Publicly Owned Company for Special Sport Shoes in Hohenleuben, a very small town in Thuringia. The special sports shoe company with the typical double stripes on its shoes became the official outfitter for the GDR Olympic teams. Handmade and manufactured from good materials, they could hold their own with competition outside the Iron Curtain. After the Reunification the company went bankrupt, and it seemed that was the end of Zeha. But only apparently: when friends of the native Berliner Alexander Barré showed him some old Zeha shoes, he decided in 2002 to revive the brand, at first by selling off the rare old stock. That quickly proved to be untenable. So, he secured the rights to the brand name and decided to start up production again. The old production facility in Thuringia was a ruin, but there were old models catalogues, patterns and shoes to be found. They became the basis for the Zeha shoe production which Barré started back up in 2003. We are offering shoes from the "Carl Häßner Meisterschuhe" series, painstakingly produced in Portugal from Italian leather.

A note on ordering:

The women’s and men‘s models are produced on the same lasts so you can order all the colours shown here from our Special Orders Department in your sizes, from 36 to 46.

In spite of their competition pedigree, please wear your Zeha leather sport shoes for non-athletic occasions only.

A Young Shoe Brand with a History. Zeha Berlin.

Zeha, as a brand, is over one hundred years old and yet young at the same time. Named after the initials of its founder Carl Häßner in German phonetics (ˈzeːha), the company became the shoe brand of choice among Berlin’s bohemians in the 1920s. Then, in the days of the GDR, the company traded under the name “VEB Spezialsportschuh Hohenleuben” (people-owned enterprise for special sports shoes in Hohenleuben) and was well-known for its handmade sports shoes. Moreover, the company became the outfitter for the GDR Olympic team. And, it has to be said, Zeha sports shoes, handmade from suitable materials, could fully compete with their Western counterparts. After the German reunification, the company had to file for insolvency, and the history of Zeha seemed to be over. However, when Alexander Barré from Berlin came across old Zeha shoes at a friend’s house, he decided to revive the brand in 2002. Initially, he sold the rare remaining stock; then, he secured the brand rights and started the production again. Since 2003 he has manufactured carefully crafted sports shoes, low and ankle-high shoes based on old models, catalogues, and cutting patterns in Portugal.

Uppers made of 100% cow leather, vegetable tanned, removable lining 100% calf leather chrome tanned, with calf leather covered inserts. The midsole is made of leather, the grained outer sole and heel are made of rubber. Sizes 36–42
More articles of the manufacturer:
Have a question?