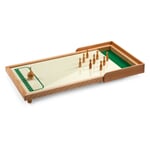 Skittles has been a popular pastime since the 14th century, and since the 19th century it has been especially common in inns. For reasons of space, bowling was often played on smaller table lanes made of wood and glass instead of bowling alleys, which were often even embedded in the inn tables.
Our lane has tournament dimensions. To play, the skittles are placed on the marked squares, the skittle with the red dot is placed in the center as the "king". Then the top is started on the hatched line - as long as it is in the marked starting area, it may still be stopped and the push repeated. Enthusiasm sets in at the latest when, in one of the numerous game variants (including all variations of the conventional skittles game), the beechwood spinning top whirs in wide arcs over the glass surface and sends the wooden skittles flying apart with a clacking sound.

Not suitable for children under 3 years. Choking hazard due to small parts that may be swallowed.