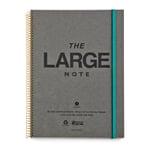 Note Book with Coil Binding
B5
In stock, Delivery in 6-7 days

With a focus on simplicity and a clear line: stationery from Korea.

In East Asia, a particular affinity for stationery in a sophisticated quality is deeply rooted and widely accepted. The absorbency and surface characteristics of fine uncoated paper are valued, and young brands come up with stationery in a fresh look but with subdued printed ruling, due to the widespread use of fineliner pens which have proven to be best suited for writing in complex characters. We have selected a few notebooks and notepads from high-quality stationery producers in South Korea.

Not for Representational Purposes Only. A Paper for Joy in Everyday Life.

The outstanding characteristics and undisputed extraordinarily high quality of Japanese stationery have partly to do with the fact that Japanese writing is difficult to mechanise on a typewriter. The first typewriters were introduced at the beginning of the last century. In addition to Japanese syllable writing the Chinese characters called “Kanji” are common in Japan. The Kanji prove to be exceptionally difficult to reproduce. Until the introduction of the personal computer in the office, it was customary therefore to write business correspondence by hand, and one used the best stationery available to leave a good impression. The passion for extraordinary stationery has survived in Japan even if it is not used for official correspondence anymore. For daily notes, a paper like the lined note paper offered here is put to use. It‘s thread-sewn and features a spine reinforced with black and gold embossed spine tape. An obscure, if amusing side remark: By printing “containing best-ruled foolscap” the Japanese manufacturer came a cropper. Because none of these notebooks is in foolscap, the traditional Anglo-Saxon paper format somewhat larger than DIN A4.

160 pages. 120 pages of soft white uncoated unlined paper (80 g/m²) and 40 pages of discreetly checkered kraft paper with a thickness of 3 mm (80 g/m²). Feint ruled insert (lines and checks) made of polypropylene. Cover made of 1.7 mm thick, grey pasteboard. Brass-plated steel spiral binding. Comes with a flat wide rubber band to secure the notebook and a small, round rubber band as a bookmark. From South Korea.