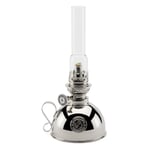 For its size, this handy night lamp gives off a surprisingly bright, flicker-free light. It also takes up little space and can be easily carried to wherever it is needed using the curved handle.

In the evolution of non-electric sources of light, lamps burning paraffin oil have always played an important role – particularly those with a round wick and a centre draught burner. These burners are equipped with a flat, wide wick which not only links the reservoir with the burner but forms a circle in the burner unit and therefore gives off far more light than an ordinary flat wick burner and also burns more evenly. The round wick burner produces no sooty smoke and virtually no smell.
The Karlskrona Lampfabrik has been operating from the South Swedish harbour town of the same name since 1884 and thanks to its extensive experience produces paraffin lamps with centre draught burners of the highest quality. Paraffin lamps still have decisive advantages over electric light sources: they work without a nearby source of electricity, they can be used in times of crisis, and they create a pleasantly warm, romantic light.

Replacement glass cylinders can be purchased from our special order department.

In the evolution of non-electric light sources, kerosene lamps are in an advanced position - especially those with a round wick or cosmos burner. It is equipped with a flat, wide wick, which is fed from the tank into the burner in such a way that it emerges from it in a circle at the top. The light yield is thus incomparably higher than with a flat burner, and at the same time the combustion is cleaner: the round wick burner does not soot and hardly smells.
The Karlskrona Lampfabrik, which has been based and active in the southern Swedish port city of the same name since 1884 and thus has a fair amount of experience, manufactures such petroleum lamps with cosmos burners of the highest quality. That they can hold their own to this day next to electric light sources has good reasons, among which are first and foremost a tangible shortage (no electricity nearby), the independence of electricity in times of crisis (self-sufficiency) and the pleasantly warm light (romance).

Reservoir and burner made of brass, cotton wick, glass cylinder. Height 23 cm, Ø 10.5 cm. Weight 260 g. Fuel not included.
More articles of the manufacturer:
Have a question?