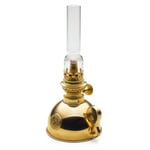 Night lamp, bright and flicker-free. Not for sleepyheads

Surprisingly bright for its small size and flicker-free in operation is this handy night lamp. It takes up very little space and can be carried around on the curved handle wherever you need it.

In the evolution of non-electric light sources, kerosene lamps are in an advanced position - especially those with a round wick or cosmos burner. It is equipped with a flat, wide wick, which is fed from the tank into the burner in such a way that it emerges from it in a circular shape at the top. The light yield is thus incomparably higher than with a flat burner, and at the same time the combustion is cleaner: the round wick burner does not soot and hardly smells.
The Karlskrona Lampfabrik, which is resident and active since 1884 in the port city of the same name in the south of Sweden and thus a shaken measure of experience brings along, manufactures such petroleum lamps with cosmos burners of first quality. The fact that they can still hold their own today alongside electric light sources has good reasons, among which first and foremost a tangible shortage (no electricity connection nearby), the independence from electricity in times of crisis (self-sufficiency) and the pleasantly warm light (romanticism).