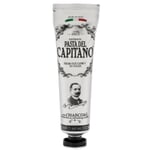 With vegetable activated carbon for naturally white teeth. Activated charcoal with its highly absorbent properties and Sulfetal Zn®, a patented molecule with zinc, clean effectively and gently, helping to remove light discoloration and prevent new ones without damaging tooth enamel. Mild foaming, with a light mint flavor. Without fluoride, sodium lauryl sulfate, triclosan and without parabens.

One of the first, if not the very first, toothpaste produced in Italy is the Pasta del Capitano Original. The original recipe, based on carnation leaves, peppermint and cinnamon, imparts an unmistakable taste and freshness to the breath. However, the reason it became popular in 1905 was its paste-like consistency. Until the beginning of the 20th century, teeth were brushed with tooth powder which was not always convenient in practice.
The toothpaste developed by Clemente Ciccarelli, a captain in the Royal Italian Army and a doctor of chemical pharmacy, was simple to use, store and transport. At first, it was esteemed as "Pasta del Capitano" in a small circle of customers and relatives of the Ciccarellis' apothecary family. The toothpaste then spread quickly throughout Italy. In 1950 the company headquarters was moved to Milan, where the family-run business has its production plant until today.

75 ml plastic tubeOriginal: Fresh taste of clove, peppermint and cinnamon. Mildly foaming. Contains sodium monofluorophosphate. Without sodium lauryl sulphate, triclosan and without parabens.Charcoal: With plant-based activated charcoal for naturally white teeth. The activated charcoal with its highly absorbent properties and Sulfetal Zn®, a patented molecule with zinc, clean effectively and gently, helping to remove light discolouration and prevent new ones without damaging the enamel. Mild foaming, with a light mint flavour. Without fluoride, sodium lauryl sulphate, triclosan and parabens.
More articles of the manufacturer:
Have a question?