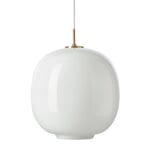 Greetings from the Danish Broadcasting Headquarters.

Vilhelm Lauritzen, one of the most important Danish architects and a pioneering representative of Danish functionalism, was a master in combining material and light. Throughout his life, he worked according to the credo: "No life without aesthetics". He designed this lamp in the mid-1940s for the Danish broadcasting headquarters. Even then it was produced by Louis Poulsen and quickly became one of their best-selling models. In an exemplary manner, its design follows Lauritzen's basic idea of combining directed light that casts shadows with diffuse light. Directed light falls downwards through the opening in the base of the shade, while the mouth-blown shade itself radiates an even and soft light into the room. Three layers of glass, an inner layer of clear glass, a middle layer of white glass and an outer layer of clear glass, build the shade of a luminaire suitable for both high and low mounting. Louis Poulsen resumed the production in 2016 after bringing the lighting technology and energy consumption up to date.