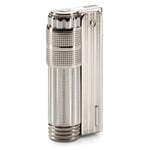 The IMCO Triplex comes with a reliable flint-wheel ignition and an adjustable storm ring that effectively shields the flame from wind effects. The fuel reservoir is an aluminium tube filled with absorbent cotton. The lighter fuel needs to be refilled more often with this model because the fuel – not slowed down by an outlet valve – migrates via a wick to the flint and therefore slowly evaporates even when not in use.

IMCO. From Austria to Japan

IMCO (an acronym for Julius Meister & Co) began in Austria in 1918 with the production of highly functional lighters whose technology was amazingly simple. The company's uber-classic, the IMCO Triplex, has been around since 1936, and was joined in the 1950s by the Streamline model, influenced by the design trend of the same name. Both are sturdy, easy-to-use, and inexpensive low-tech devices that were manufactured (and, of course, offered by Manufactum) until production was closed in 2012. A year later, the Japanese lighter manufacturer Windmill acquired the naming rights from IMCO and reconstructed the tools used to make them, which by then were completely worn out. Since then, he produces the two exiled Austrians in its Chinese dependence.