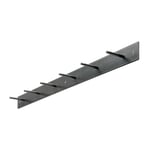 Coat rack made of raw steel.

Reduced and at the same time more functional can hardly be. This coat rack consists of one piece of flat steel and six notched round bars as hooks. They are placed in such a way that even when mounting two or more of these coat racks side by side, the distances between the hooks are always the same. The material is not rustproof, but the raw steel is oiled. Rust is therefore not a problem outside of damp areas. From Germany.

The vestibule used to be the largest room in the house. Not only public life, but even trade and commerce took place there. Over time, due to the narrowness of cities, it shrank more and more into a mere corridor or corridor. Today, the corridor is a little-noticed passageway in this country. Elsewhere, for example in Scandinavia or Spain, it still has a high status. For good reason: after all, it not only gives people coming in a first impression - and that is what counts - of the apartment or house. Above all, the hallway is the interface between private, domestic life and public life outside. In recent times, the hallway has gained in importance again, which is due to all sorts of mobile electronics that we are forced to carry with us outside the house (in the past, a coat, hat and umbrella were enough). For this reason, we offer some hallway furniture that takes this into account. In addition, the hallway is also a good place to remind people of things to take with them or to do - countless sticky notes on the front door prove it. We offer two helpers - both made of raw steel - which are formally very restrained and puristic, but functionally all the more versatile.